Family violence includes abusive behaviours that impact the wellbeing of others.  It includes intimate partner violence, elder abuse, sibling conflict, and other interpersonal conflicts. Family violence and abuse are learned behaviours which are rooted in the need to exert power and control over others.

Forms of violence and abuse

All forms of abuse are serious and harmful.  Abuse tends to become more frequent and severe over time.

Abuse may occur in a pattern or cycle; although common, this is not always the case. Within the cycle of abuse, there will be periods of calm, time when abuse occurs, and also times where abusers feel remorseful.  Abusers may promise to change and the relationship may be calm again for a while. Without intervention, the cycle of abuse tends to repeat itself. It is common for abuse to become more frequent and more severe over time. 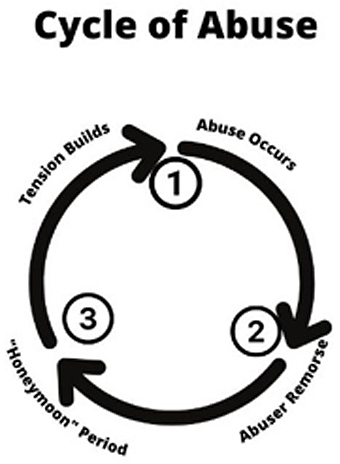 For any questions or clarification of services, please send us a message using the Email button below.